An interview with Higuchi Hina and Hoshino Minami about the latest single, why Nogi members get along, and the future.
Source: BOMB magazine, April 2020 issue

— It’s Nogizaka46’s 25th single, but all eleven 1st gen members entered senbatsu!
Minami: I was surprised. During the senbatsu announcement, when my name wasn’t being called, I thought, “[I wasn’t picked] this time, even though it’s Maiyan’s graduation single, it’s lonely…” and resigned myself to it, so I was extremely happy.
Hina: I also cried tears of happiness. Then, after the senbatsu announcement was finished and I stayed behind alone, Maiyan came up to me with teary eyes and said “I’m relieved,” and hugged me, I was so very happy.
M: I’m happy the 1st gen can do senbatsu activities with everyone together.

— It’s Minami-chan’s first front position since the 5th single “Kimi no Na wa Kibou,” isn’t it?
M: It’s been too long, it feels weird [laughs]. But there are 1st gen members behind me, beside me, and in symmetry with me, so I feel secure. Everyone was also chatting with each other when we shot the MV.
H: It was fun, wasn’t it? We livened up talking about our early days and stuff like that.
M: During breaks in the dressing room or during the shoot, we talked about silly stuff [laughs].
H: Even though we were told “It’s about time to get started~” we were always talking. At the “Action!” cue, everyone snapped forward [laughs].
M: We took a group photo of all the 1st gen surrounding Maiyan, it was fun.
H: The kouhai also told us “We’re happy all the 1st gen members are together,” right?
M: Right, right. Hazuki was all crying and saying “I’m happy!”
H: From our perspective, we’re also happy that the kouhai are able to think of us that way.

— Once more, what would you say are the 1st gen’s good points?
H: In the beginning, we took this environment for granted as being normal, but it really isn’t, is it? It’s a large collection of girls who are just plain good.
M: I think it’s miraculous there wasn’t conflict even with such a large number of people.
H: I wonder why that is?
M: I guess some of it was that there weren’t many strong girls who asserted themselves. Since there weren’t hungry girls who were like “I want to go in front!” it might’ve been easy to do things.
H: There are a lot of girls who mutually recognize each other. It seems like even when there were areas that didn’t match, they still included and accepted that in each other. It’s a relationship that’s really like a family.

— When the kouhai entered, did that kind of atmosphere change?
H: No, the 1st gen has many girls with mild personalities, so maybe girls with a relatively similar atmosphere gathered in the kouhai.
M: Like, even the 1st gen mothers get along, right?
H: Right, right. At some point, without the kids knowing, the fellow mothers were going out to lunch and stuff.
M: Like Ikoma-chan’s or Nanase’s mamas, the graduated members’ mamas too, they were having year-end parties or new year’s parties [laughs].
H: It’s like they have a “Nogi Mama Association.”
M: There’s a warmth that really feels like family. If things weren’t like that, I feel like it couldn’t have stayed a group for this long. (Note: The language is slightly ambiguous, I’m not sure if she meant “I couldn’t have stayed in the group this long”)

— For the two of you, this year is the 9th year since your debut.
M: But Sayunyan’s also graduating, the 1st gen’s going to be 9 people.
H: When we debuted, there were over 30 people… it’s so lonely! But, this many 1st gen remaining in the 9th year is on the long side, isn’t it?

— Why were you able to stay in the group for such a long time?
H: I think there’s something about Nogizaka46 where you feel so at home that you forget about time.
M: There’s nothing but kind good girls in the group. But if all the 1st gen are gone, it’ll be lonely, so I just don’t want to become the very last one!
H: I think that. You want people there to see you off, right?
M: I want to be together with everyone in the 1st gen when I graduate~

–The two of you who were in Nogizaka46’s “youngest group” have also turned 22 years old.
M: But in my mind, it feels more like “I’ve been doing this for so long, and I’m still only 22~?” I’ve been working since I was 13 [laughs].
H: That’s certainly the case. I feel like I’m still 22 so I can do anything. It’s just, I don’t have any experience in society like having part-time jobs, I wonder if that’s okay?
M: We’ve tried this hard in Nogizaka, so it seems like we can do anything. I’ve decided that after I graduate, I want to work one time at a theme park. I’ll sell popcorn.
H: Ahaha. That seems like you.

— What kinds of things does Higuchi-san want to try in the future?
H: I want to be involved in entertainment, and I also have interest in things like underwear design. It’s just, recently I’ve been thinking about various practical things, I’ve been reading loads of books about tax and stuff.
M: No way~!?
H: I’ve been consulting the big sister members. Because Nakada Kana-chan knows a lot in that area [laughs].
M: Wow, so serious! I just live going along with the flow… Even if I get a job after graduation, I want to live a life that can’t be tied down. A job where people don’t get mad at me or the rules aren’t strict would be nice.
H: That’s Minami-like [laughs]. 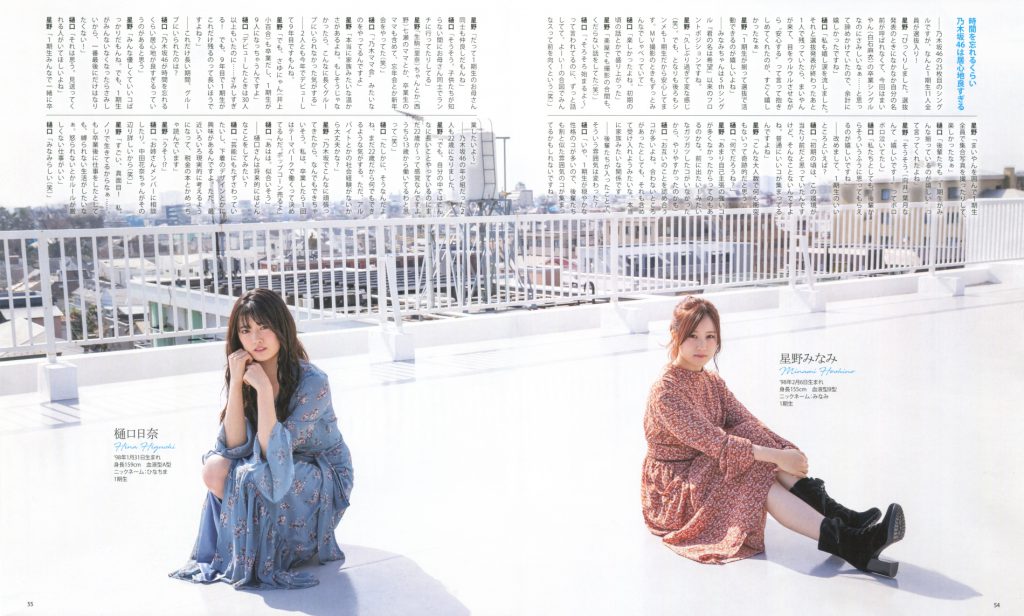